Turn captions on and off
The Making of "Wind in the Heights", a Time-Lapse Movie

In terms of expression, my intent with this piece was to capture the dynamic motion of clouds over the heights. I set the interval between shots to one second for a smoother effect. Because the clouds sometimes hid the sun, I set the exposure mode to aperture-priority auto and enabled exposure smoothing.

Filmed and narrated by YAMANO Yasuteru

Things to Know About Time-Lapse Movies

A time-lapse movies is created from a large number of photos taken at a set interval. Not only can they make time appear to pass more quickly, but by choosing long exposure times for each shot, you can use them to create footage in which dark subjects, such as the night sky, are clearly visible. With a sufficiently high-resolution camera, you can create time-lapse movies at resolutions of not just Full HD or 4K UHD but even as high as 8K UHD.

The process of filming a time-lapse movie consists of two stages: one in which interval-timer photography is used to create the individual frames and another in which they are joined together to create a movie. The camera time-lapse movie option combines interval timer photography and movie creation in a single step, while the interval time shooting option can be used to record the individual frames that will become the raw materials for a time-lapse movie. The time-lapse movie option creates only a movie file and is best reserved for casual experimentation, while interval-timer shooting can be said to be targeted at advanced users, as it allows the individual frames to be enhanced with minimal loss of detail (particularly if the photos are in NEF/RAW format) and permits a variety of effects to be added during movie creation. Because both involve the interval timer, skillful adjustment of interval-timer settings is key. 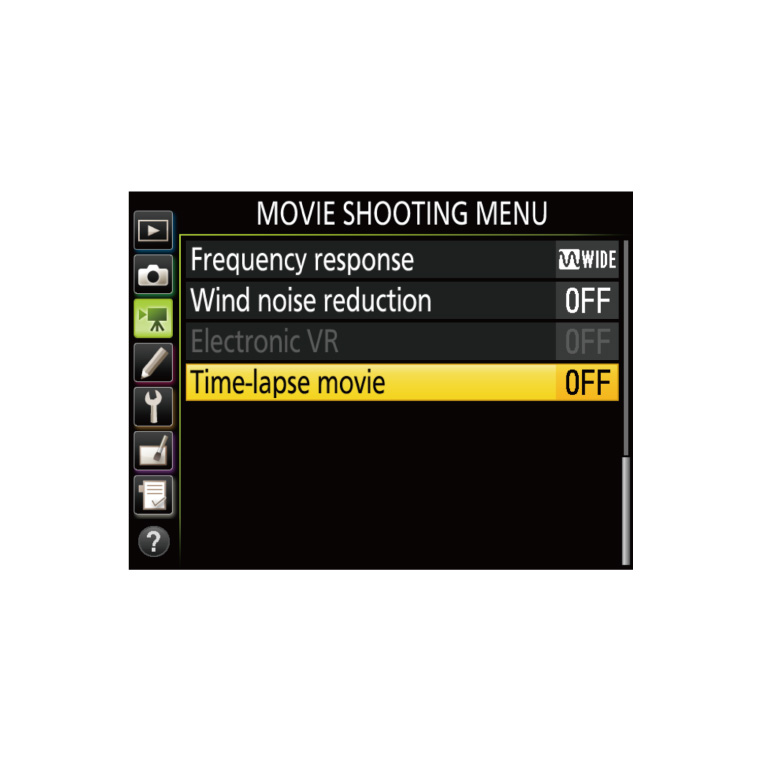 Time-lapse movies have captured cinematographers’ imaginations for a variety of reasons, the most important being as a means of realizing the creative goals already mentioned: speeding the passage of time or capturing the motion of celestial bodies in the night sky. In addition, time-lapse movies have attracted attention for the fact that they can, owing to the high quality of each of the individual photos (or in movie terms, frames) that go into making the movie, be used to create high-definition, high-quality footage. More specifically, they fill the need for high-definition 4K or 8K movie content.

And at the risk of stating the obvious, the raw material for time lapse movies can also be made to serve multiple needs: if the shooting conditions and equipment for interval-timer photography are selected to maximize image quality, the individual frames can themselves be made into photos of the highest quality, allowing them used both as a part of a time-lapse movie created at a later date and as photos of pivotal moments. This is one of the reasons interval-timer photography is such a popular choice for phenomena such as total solar eclipses, where it can capture the entire event from before the eclipse enters totality until after it leaves.

All of this makes it difficult to provide a systematic description of the expectations surrounding time-lapse movies and interval-timer photography; instead, speaking as someone captivated by the expressive power of time-lapse movies, I will show stills from some of the time-lapse movies I have filmed to date. 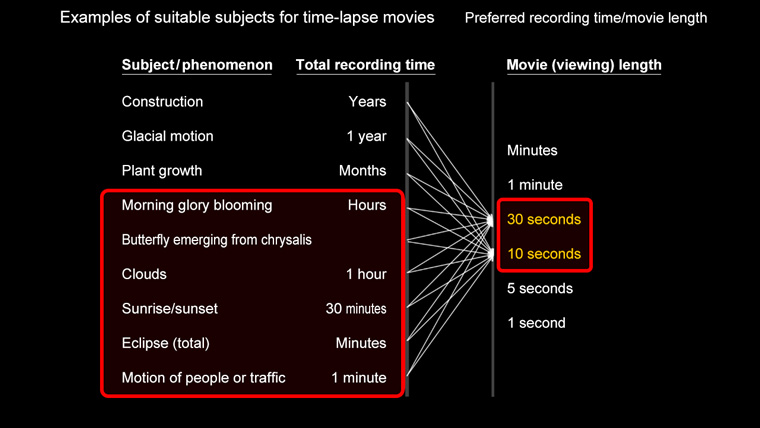 Some subjects that might benefit from speeding the passage of time

The most important question to consider before filming a time-lapse movie is “how long will I need to film this subject”.

First, based on the speed at which your subject changes, choose an interval that will make the motion appear smooth in the final movie. The number of shots can similarly be estimated based on directorial considerations of “what frame rate do I want and how long do I want the final movie to last”. To calculate the number of frames needed to create enough footage for say, 30 seconds playback at a frame rate of 30 fps (30 frames per second), you would multiply the length (30 seconds) by the frame rate (30 frames/second), yielding a total of 900 frames. It is of course normal for photographers to take more shots than is strictly necessary, as during the editing process they may find footage they don’t need or sections they want to play slower. The total recording time can be calculated by multiplying the interval by the number of frames required based on these considerations.

As an example, say you want to show clouds flowing gently past, with an interval of 1 second between shots: to create 60 seconds of footage at a frame rate of 30 fps, you would need a minimum of 60 by 30, or 1,800, frames, although in practice you would shoot more, say 2,000 frames. To shoot 2,000 frames at an interval of 1 second would take 2,000 seconds, for a total of 33 minutes 20 seconds shooting time from beginning to end.

Speeding the passage of time 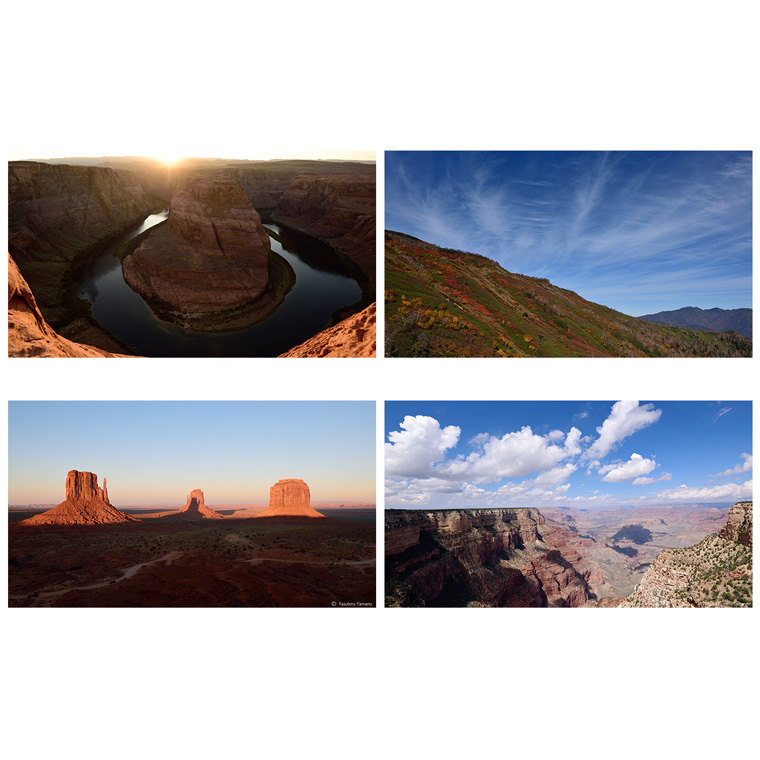 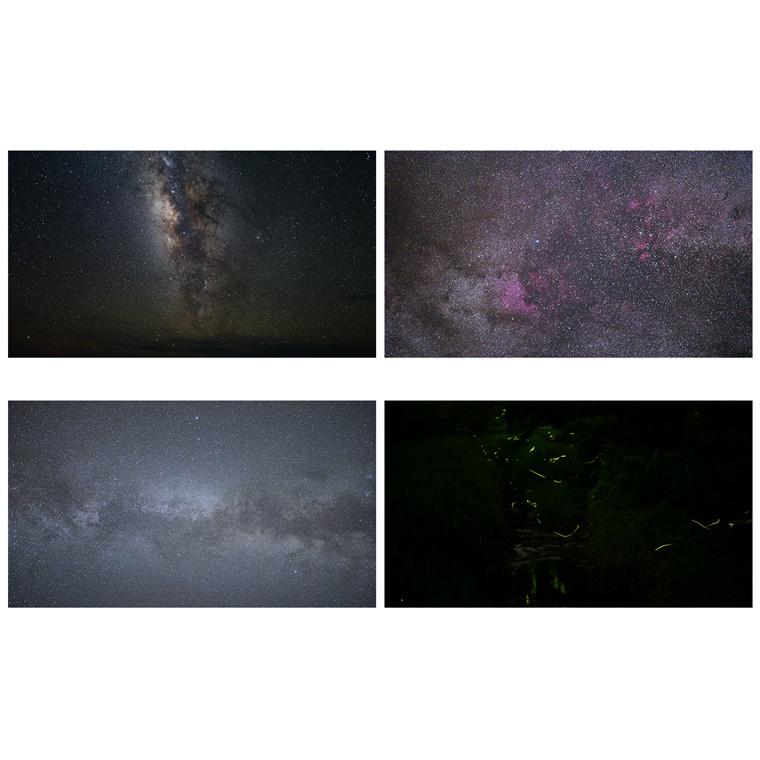 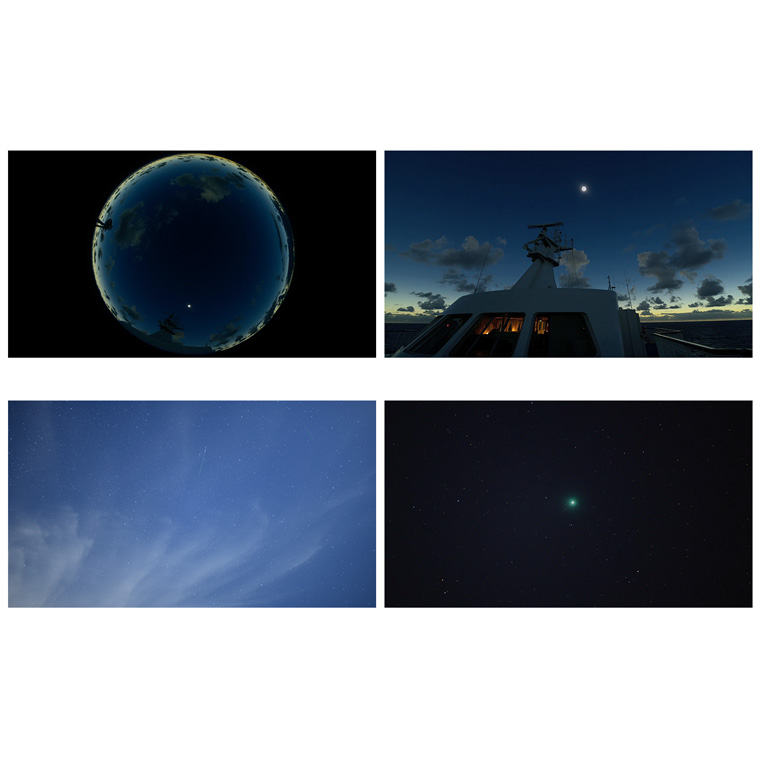 Features of the D850

The D850 not only boasts the interval-timer shooting feature so popular with users of the D810, but also features a variety of functions for enhanced expressive power and productivity.

In interval timer photography, a question that is sometimes of interest is how short the interval between shots can be. Specifically, this question arises when intervals as short as a second will nevertheless result in jerky footage. If your only goal is smooth motion, you can extend the exposure time until it is nearly the same as the interval, but the individual shots will then lose definition due to motion blur. In this case, the only option for reducing jerkiness while keeping the exposure time comparatively short is to reduce the interval between shots, and the D850 lets you choose intervals as short as half a second (Interval timer shooting only; not available with Time-lapse movie).

Most time-lapse movies require the interval timer be used for anywhere from a hundred to over a thousand shots. Battery endurance is consequently an important consideration. Not only does the D850 improve on the D810’s performance with an endurance of about 1,840 shots when used with an EN‑EN15a battery, but when used with an EN‑EL18b inserted in an optional MB‑D18 multi-power battery pack, it is capable of up to 5,140 shots, letting you take large numbers of photos worry-free.

The repeated use of the shutter and mirror during interval-timer photography is a concern not only for the noise and vibration it causes but also for the wear it imposes on the equipment. The D850’s silent photography option eliminates use of the mechanical shutter during shooting, while the mirror is only raised and lowered at the start and end of photography. Silent photography is ideal for interval timer shooting, as it dispels all concerns surrounding noise, vibration, and wear

Although silent photography does in general increase rolling shutter distortion, this is not a concern during time-lapse photography, which most likely does not feature subjects that quickly cross the frame.

When starting interval-timer photography, it is often difficult to predict just how the subject will change during shooting. Photographers may therefore want to shoot in NEF (RAW) format so that they will have the greatest possible freedom to alter exposure and white balance after shooting. On the other hand, processing anywhere from a hundred to over a thousand shots, each 45 megapixels in size, can be a daunting prospect.

This is the problem that on-camera batch processing of NEF (RAW) images has been introduced to solve. Depending on the computer’s specs, processing a thousand images using Capture NX‑D would take about 3 hours (see Note 1), while the same task (see Note 2) performed using the camera’s batch NEF (RAW) processing option would take about 25 minutes (see Note 3). Although the processed images must be saved in JPEG format, the greatly reduced processing time makes this a good choice if you want to try processing the images in a number of different ways to determine the optimal result.

If aperture-priority auto, for example, is combined with silent photography and exposure smoothing during interval-timer shooting, the D850’s exposure metering system will automatically adapt to much lower light levels. The night can be dark enough that you can see the Milky Way, and yet the camera will still be able to meter light at levels so low that you can capture every star in the sky.

Of course, photographing subjects that dark requires a fast lens and skillful choice of settings, including the correct exposure mode and auto ISO sensitivity control, but the ability to take correctly exposed shots of subjects formerly too dark for auto-exposure greatly expands the creative possibilities available. The more creative the photographer, the happier they’ll be.

Needless to say, aperture-priority auto is an auto-exposure (AE) mode, and can be used not only to photograph the heavens at night but also subjects that vary greatly in brightness, such as a sunset darkening to a star-filled sky.