Focus Shift: What It Does and How to Enjoy It

Focus stacking is a means enhancing depth of field by taking a series of shots and generating a composite image consisting only of the areas that are in focus. Although dedicated focus-stacking software has been around for a while, the hard part was getting suitable high-quality raw material.

Specifically, what was difficult was taking a series of photos while changing focus a small, fixed amount with each shot. It used to be hard to change focus by the same amount with each shot, and unless you finished shooting quickly, there was a chance that the light would change or some other difficulty might arise, resulting in photos that were not suitable for focus stacking. This is precisely the sort of difficulty the D850’s “focus shift” feature, which automatically varies focus by a set amount over a set number of shots, was introduced to solve.

When it comes to focus stacking, it might seem natural to ask, ‘Why go to all that trouble when you can just stop aperture all the way down?’ but it’s not that simple. Given the same aperture and a lens focal length chosen to produce the same picture angle, the large image sensors in FX format cameras and the like will show a shallower depth of field than smaller sensors, so you really have to stop aperture down to get a deep depth of field. And stopping aperture down increases diffraction, resulting in pictures that lack definition.

In these circumstances, the way to get good depth of field without stopping aperture down so far that pictures lose definition is focus stacking. I think the ability to produce high-definition prints with deep field depths at sizes of B0 or larger will be celebrated not only by photographers who want highly detailed shots of insects and other traditional focus-stacking subjects but also by landscape photographers shooting commercial photos or works they plan to exhibit. 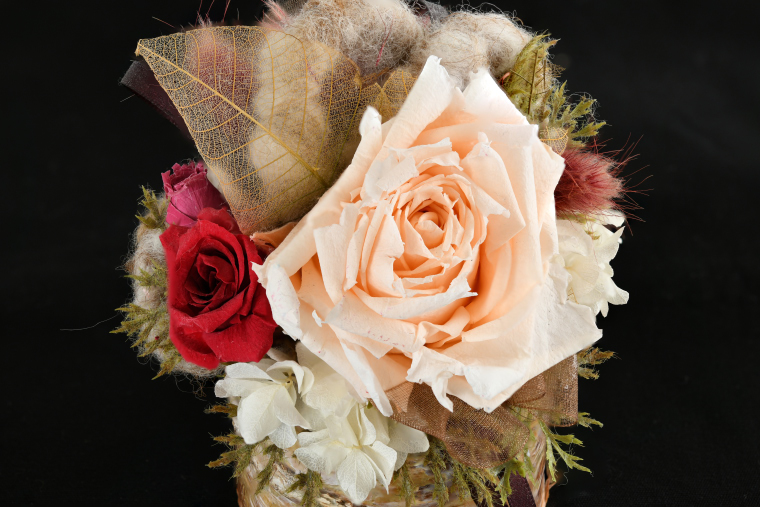 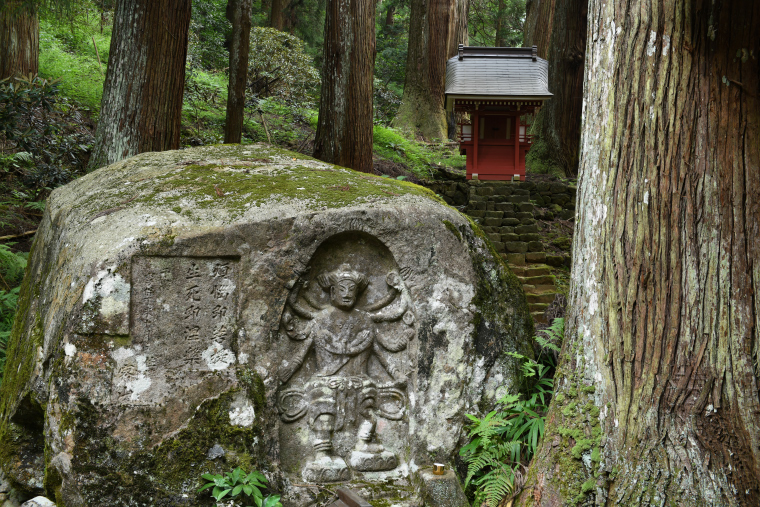 To adjust focus shift settings, go to the photo shooting menu and select Focus shift shooting. The options available include No. [number] of shots, Focus step width, Interval until next shot, Exposure smoothing, Silent photography, and Starting storage folder (with sub-options New folder and Reset file numbering), but the ones with the greatest influence on how focus stacking turns out are Focus step width and No. of shots. And although they aren’t in the menu, other important factors are aperture and the starting focus position. We’ll take a look at each of these in turn. 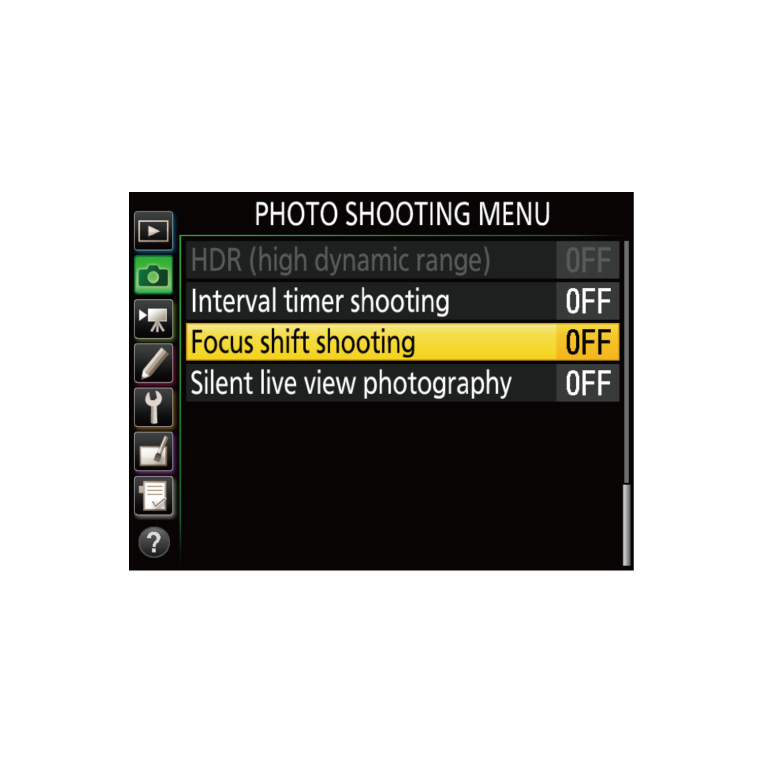 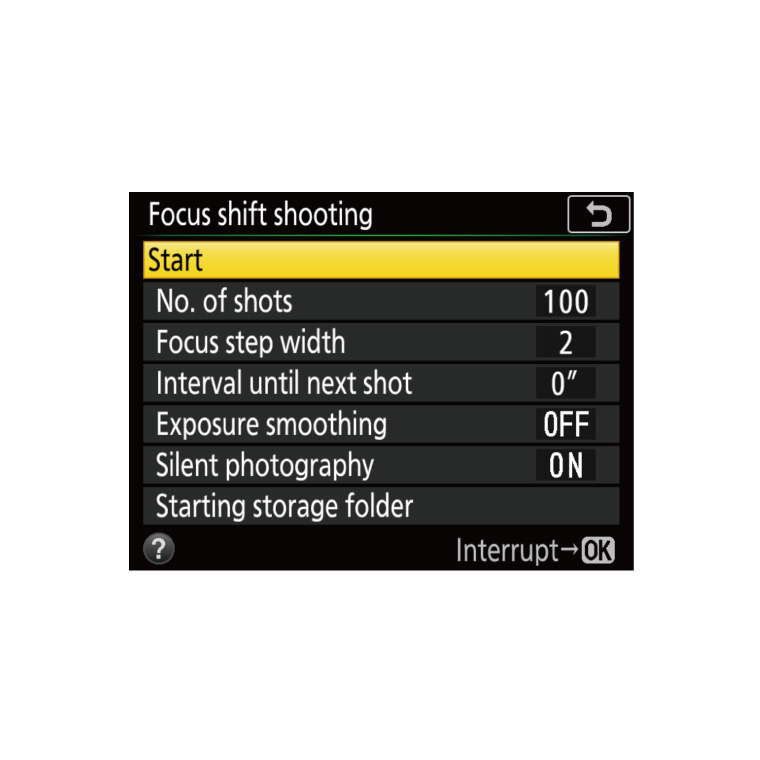 Because we don’t need to worry about getting a deep depth of field with a single photo, we can instead consider how aperture can be adjusted to produce a high-resolution, high-definition image with each shot. Specifically, we need to think about the aperture at which the lens performs best. If diffraction were our focus, it could be minimized by shooting at maximum aperture, but, given the characteristics of the lens, a setting two to three stops lower, say f/2.8 to f/8, is in fact generally best if we also want to keep the definition image high right up to the edges.

In focus shift, the camera takes a series of shots starting from a selected focus position and continuing toward infinity. We will therefore choose a starting focus position either at or slightly in front of the closest point of the section of the subject that is in the desired depth of field.

Personally, I focus on the closest point on the subject visible in the frame and then slightly reduce the focus distance before I start shooting.

You have a choice of ten focus step widths, ranging in value from 1 to 10. The amount the focus distance changes with each shot is not determined solely by the focus step width but is calculated by the camera based on a variety of lens data, including focal length and aperture, so it’s probably best to experiment until you get the hang of it.

Focus shift photography itself is very easy and there is no need to worry about taking too many shots, so I generally choose a focus step width of 2 or 3 for images I want to print at a large size.

The number of shots can be set to values between 1 and 300. Speaking from experience, you’ll generally need over a hundred shots to cover the desired field depth when photographing an insect or other small object using macro photography at the settings described above, namely an aperture of f/5.6 and a focus step width of 2 or 3. On the other hand, to cover a landscape starting close to the camera and extending into the distance, you need only take a few shots, particularly if you are using a wide-angle lens, as the depth of field of each of the individual photos will already be quite deep.

The D850’s focus shift function includes a feature that automatically ends shooting when the focus distance, which increases with each shot beginning from the starting focus position, reaches infinity, so you needn’t worry that it’ll take a bunch of photos you don’t need after infinity is reached. It can be tricky to choose the minimum number of shots needed based on the lens focal length or focus step width, but you can take some of the pressure off during shooting by taking a large number of photos with the idea that you can choose the ones you want during focus stacking.

Starting with the interval between shots, “zero” is basically a good choice. With the interval set to zero, the camera starts shooting the next photo as soon as the previous one is finished, meaning that the focus-shift series can be completed in the minimum amount of time. Longer intervals are only needed to force the camera to wait when, for example, each photo uses the flash and you need enough time between shots for the flash to charge. Zero can be considered the best choice in all other cases.

Exposure smoothing adjusts exposure to smooth out changes in subject brightness that may occur during shooting, but really you want all the photos in a focus stacking sequence to be shot under the same lighting and other conditions in the shortest possible period of time. The default setting of “Off” is recommended in most situations, but you can choose “On” if you have no choice but to shoot under changing light conditions.

When using focus shift, you’ll mostly be photographing stationary subjects with the camera on a tripod, and you can either choose silent photography or shoot with the regular mechanical shutter. Personally, I prefer silent photography except in situations in which the camera must be audible, partly because it means I don’t have to worry about wear on camera mechanisms such as the mirror and shutter. 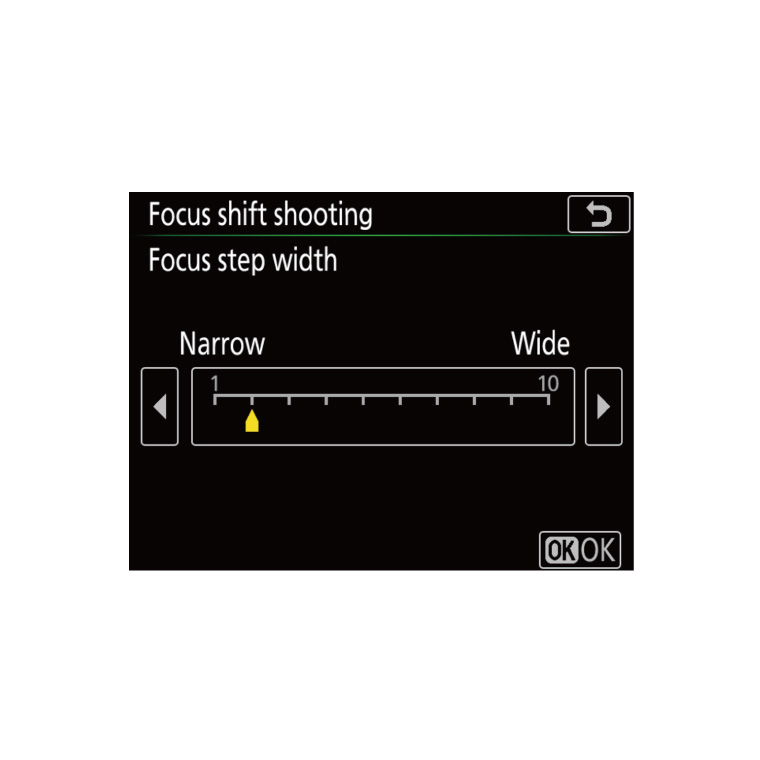 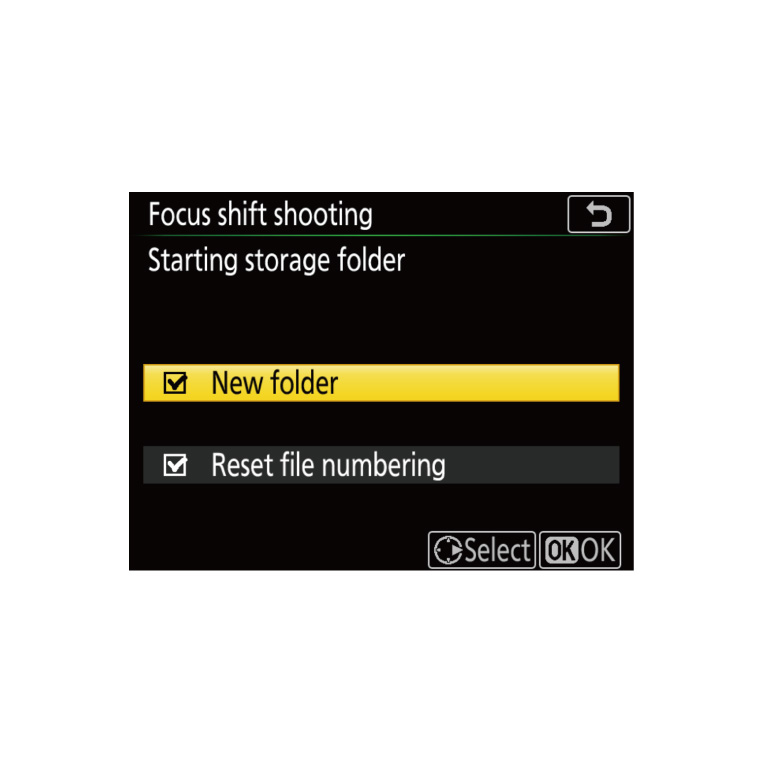